Resting after a morning of digging potatoes

Ok, so she was chasing crows while I dealt with the spuds

Resting after a morning of digging potatoes

Ok, so she was chasing crows while I dealt with the spuds

Posted by tintalasia on October 28, 2013 in Farming, pets

Wish I had photos of the crows in the field, but they’re not terribly sociable
unless they’re laughing at me from the treetops…
so a photo of the damage to the potatoes will have to do.

It’s not for nothing that I’ve had the song, “Three black crows” by Blackmore’s Night going through my head all morning.

I was headed out to the sheds when I saw a field of black where the potato harvest was waiting. I have to say, I love crows. I love when they sit in the trees and craw at me as I go past, as though they’re sharing a really funny joke. As pretty as the sight is, that does not mean I like seeing them all over the grain or potatoes. Crows like sharing. They’ll dig up the potatoes close to the surface, peck randomly at the potato, then, in their generosity, leave the remains of the potato for us. I’ve tried to tell them that their notion of generosity isn’t working, but to no avail.

I was going to put out stakes with ribbons of plastic into the fields and, with that in mind, I was scouting through the sheds. In my hunt, I found the recycling bin… Beer Cans! So we have stakes, a bit of twine and beer cans. I reckon that makes this the most kitsch potato field around!

Recycling at its best!

Posted by tintalasia on October 22, 2013 in Farming, Ireland

The indestructible spirit of the WWOOFer

A little while ago, I wrote an article for a magazine few people would get to read. It’s the WWOOF Ireland’s official magazine. I walked into the kitchen just the other day to find my own face laughing up at me. A goofier photo of me would have been hard to find! The photo was taken by a fellow WWOOFer, a lovely German girl with an bubbly spirit and a camera attached to her arm. She was relentless and the tiny hedges didn’t provide enough cover for me to hide behind. 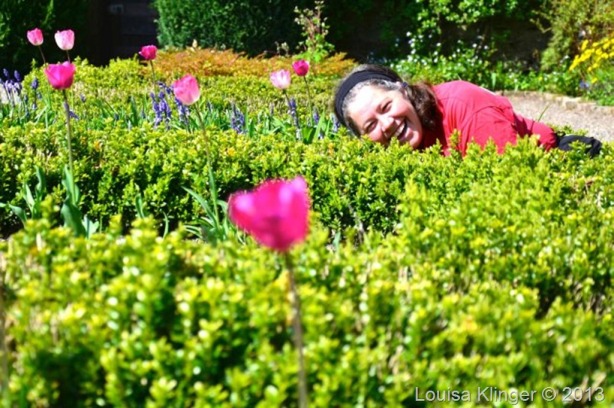 It was with mild surprise that I found they’d published my article. The article in question was inspired by news of one particular WWOOFer who’d moved on from the farm we were at, but it brought to mind many others I’d met and some of the incredible tasks they did with smiles and a healthy dose of fun.

The indestructible spirit of the WWOOFer
by Corrianne Lasevicius

Long ago, when my friend suggested we try our hand at WWOOFing, my perception of WWOOFers was, at the very least, enormously different from what I have come to know of them. She described them as mostly young people who help out on farms. My imagination filled in the details of sun-kissed youth singing and chatting their way through apple harvests. Now, it’s not as though that never happens, but reality has painted a rather different portrait in my mind. We’ve been WWOOFing for just over a year now. The farms we’ve worked on have varied greatly, as have the hosts, but this article is about those busy ‘worker bees’ who flit though Ireland’s fields and gardens.

My thoughts go back to a German chap who was working with us at one farm. He had just left, but as happens among WWOOFers, we kept in touch for a while. He arrived at his new host, keen on the experience he’d be getting on that farm, as it was very different to the one he’d just left. The morning after his arrival, he went downstairs for breakfast to find the place empty. A note had been left on the table. The family had rushed in to hospital with the host who had suffered a heart attack after finding one of his sheep had been killed in a rather grim manner. The sheep had left behind a new-born lamb, which our intrepid WWOOFer had to care for and care for it, he did.

In what other field would you find a pair of young girls hauling logs that would make many men consider using machines and chains; all the while practicing their song they’d learnt for the local craic? There was the team of 3 who were instructed to empty the ancient glasshouse beds, the thin layer of soil hiding mostly very large rocks, then to fill them with the same plus a generous helping of manure and compost, only to be told to empty them completely for restoration.

Mud, mud, glorious mud! It isn’t just hippo’s that enjoy wallowing in the mud. Ask any Irish farmer and you’ll hear about last year’s rains. WWOOFers waded through it, turning the soil, planting, weeding – an especially delightful task in the mud. None of that came even remotely close to the sheer pleasure of chasing stroppy pigs through mud. For some reason, the same mud that sucks your wellies off has no effect on a prancing pig! We strongly suspected that the pig was enjoying watching the tiny band of WWOOFers struggle through the mud to get to her, knowing it was a futile task and we’d ultimately resort to bribery with juicy beets. Still, you’d often find the WWOOFers stealing a few moments to chat to the pigs or feed them tasty treats from the kitchens. 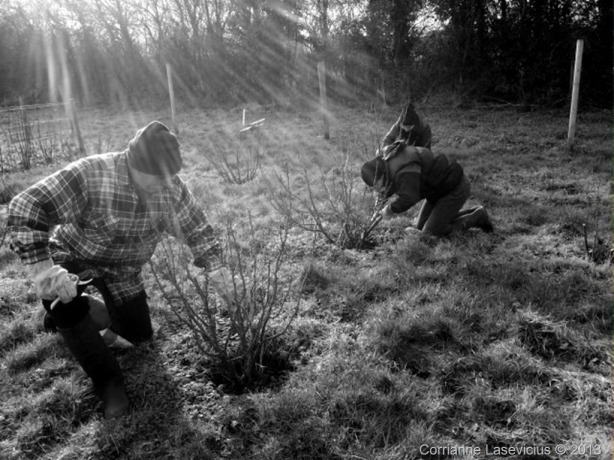 In keeping with the theme of Irish weather, the story must be told of the team of WWOOFers who were digging out an entire formal garden to be replanted. In the space of an hour, the weather changed dramatically every five minutes, quite literally. One enterprising WWOOFer decided to time the changes. In that hour, the ever-creative Irish weather threw sun, rain, hail, wind, then more rain, sun, hail and wind at them. It was a source of great amusement and entertainment to that team of workers.

I watched a diminutive Japanese girl overcome her horror at picking sawfly larvae off thorny gooseberry bushes to the extent that she eventually made it her personal mission to eradicate every last one of them. As she went to war on the sawfly, her attacks grew more creative. She bore her scratches by the gooseberry thorns with pride. You have to admire the spirit of the two Italian boys who dug a trench the entire length of a field with trowels. No, we don’t know why they chose to do it with trowels, but we do know that they had plenty of energy to go hiking afterwards.

One of the reasons we opted for our current farm was the goat milking. Having worked with goats before and loved them, sweet darlings that they were, I was keen to befriend another goat. Wait! This one has horns and knows how to use them. If just the right leaves from her favourite tree aren’t offered, she’s likely to use the horns on you. I learnt that the hard way. Day one left me with bruises. Day two left me without milk in the bucket, though the dogs enjoyed the spoils on the floor. I’m pretty sure that it’s the WWOOFer spirit that drove me back to her side for another go on day three. We’re friends now… at least, on days when all the stars are aligned.

Is there any other ‘career’ where the workers drag themselves home at the end of the day, exhausted and bone-weary, but rise to go back to the same work with a spring in their step, chatting and singing all the way… voluntarily?

Posted by tintalasia on September 18, 2013 in Farming, Garden, Ireland, Writing

Sharing My Passion For Nature With The World

I would have beaten any type of cancer

Welcome to the real world

Part of my journey to contribute to a more beautiful world...

Musings From an Alternate Universe

Learning the language of the subconcious

Smile! You’re at the best WordPress.com site ever

The Adventures of an Irish Farmer

Beautiful photos of hiking and other outdoor adventures.

Living the life of the common people.

A Blog of the Ridiculous and Sublime, by Mark Sackler

A simple mans idea's to Be Prepared

Not Alice's kind of wonderland